The colourful unbattened sail of the Minisail is (or was) one of the defining attributes of the class - together with apalling sail-shape caused by use of a soft, stretchy sailcloth in the early sails. Down the years a number of different sailmakers added Minisail mainsails to their offerings, after all, it wasn't hard to produce a better sail than the standard one. 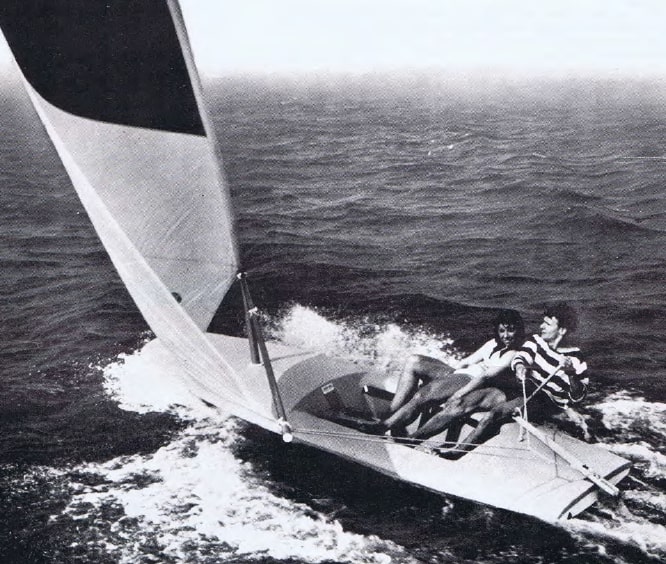 The sail for Minisail 10 was made by a sailmaker called Irvin Ca 1960. A company of the same name was a wartime parachute maker... but maybe just coincidence... The sails with   the boom pockets needed a telescopic boom for reefing - these were sold as an optional extra. There was one seen at Whitefriars a few years ago.

Many boats were sold with sails badged "Richmond Marine", some of these were made by Ratsey and Lapthorn, but not all. They are all likely to be past their racing prime now and weren't too well regarded even when new it seems. Other sailmakers joined the fray - after all the Minisail was once Europe's fastest growing singlehander. Amongst them Rockall and possibly Musto & Hyde. Macnamara also produced Minisail sails, surviving ones indicate the use of a more substantial, stiffer cloth and opting for a shorter foot than many. They seem to have been very well regarded back in their day.

The MiniSprint II gained a  boltrope-footed sail made by Holt. The addition of the bolt rope may have been more fashion than logic - it makes rigging and furling round the mast a much more tricky operation - luckily the sails seem to work fine when set loose-footed. Some Holt sails seemed to use a full cut, others were flatter; several foot lengths exist too. In each case they were made with a softish cloth but of good weight and generally seem to set fairly well even after many years.

R&J Sails have produced a number of Minisail sails in recent years - reportedly well made and competitively priced. Dick at R&J is very knowledgeable and helpful.

Ian from Morgan Sails worked with both Rupert Whelan and Philippe De Clercke over the last few years to produce two Minisail designs. The standard sail (no battens) was cut to match the standard gold or black masts, the first version was short in the luff, because Ian was initially picturing Laser-style Cunningham loads stretching it to the max, but in practice the downhaul was barely used so subsequent sails are only an inch short of the 16' maximum luff length.

The Morgan Max sail recreates the idea of a battened sail which was introduced late in the 1970's. The battened sail seems to have coincided with the fall of the class, when Richmond Marine had relinquished control of the published class rules. Only one or two period battened sails are currently known, these two (below); the first sold in 2014, note the sail number over 10k, it seems that these were called just a "Sprint" and not a MiniSprint (note sail insignia in each case)... 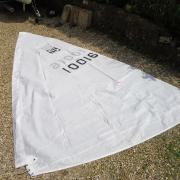 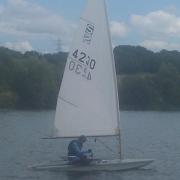 The new Morgan sail is slightly longer in the luff (about 16'1/2") than standard - apart from this tiny amount it is otherwise the same dimensions as the standard Morgan sail, however the addition of the battened roach takes the total area up to around 8.2sqm (versus the 7.4sqm of the standard sails). See the Handicap page for more info on racing handicap though as the CVRDA and most clubs opt to run this configuration on a faster handicap (at which it is still competitive in the author's experience). The picture below shows a Max sail overlaying a Holt sail (No.6021) - click the image for a larger version - the Holt sail is just visible right along the luff indicating that they are cut for the same mast bend, what the picture doesnt show is that the Holt sail is then flat-as-a-board whereas the Max clearly has some fullness cut in the seams.... The Max sail needs a lot of downhaul though (unlike other sails) to keep this fullness from wrinkling badly as sheet tension is applied.

It is well worth getting in touch with Ian Morgan or Dick Hannaford if you are in the market for a new sail.

The table below compares the sizes of sails; note that all sails have a shorter foot than the rules allow (partly for sail shape, partly to help keep the boom out of the water, maybe partly aesthetics too - who knows!).

A quick note on sail area, the marketing material usually describes the sail area as 7.4sqm or so, which is the theoretical size based on class rules.... based on sizes of real-world sails the area is more like 5.7sqm- 6.3sqm. For comparison a Laser Radial is 5.76sqm and a full-rig Laser is 7.06sqm so the variation is really quite big. The thing about the extra size of Minisail sails is that the variation is all in the length of the foot which contributes little to overall performance - hence the more developed the sail, the shorter the foot (at least back-in-the-day).

A word on masts - there is some evidence that late Minisprints used a stiffer mast - with the top section plugging inside the lower rather than sitting on the "bottletop". There doesn't seem to be any difference in stiffness between early Minisail (gold) and later MiniSprint (black annodised) bottletop masts though. Replica Laser Radial masts seem to have the same outer diameter but thicker wall and the lower is sleeved and a lot heavier. The radial rig is shorter than the Minisail by several feet, so an extension is required (or a shorter sail!) if you want to try one.

If anyone has information on other sailmakers (or more info on the ones mentioned above) then we would be very pleased to hear about via email, facebook or the forum. 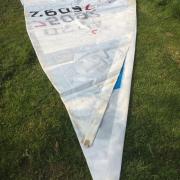